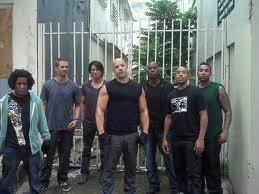 Our family participates and enjoys popular culture as much as the next person, perhaps. We love going to the movies…enjoy popular music…give popular art a chance. We are not classical snobs…and don’t want to be. We strive to find what is good in whatever ambience we find ourselves. Yet, we don’t embrace whatever is popular and call it “good.” We strive to be critical thinkers—that is, we question what we experience…either during the experience or after. We can enjoy the Twilight films, but we don’t embrace all of the ideas set forth. We can watch Ugly Betty on television…but we realize that the show pushes a homosexual agenda, and we don’t support that agenda. Being aware of the underlying themes and ideas allows us to watch, participate…but not get sucked in. And, I hope we’re always that way.

Last night, we saw Fast Five...the fifth installment of the Fast and Furious series. The show was good fun. The dialogue was clever here and there. Having lived in Latino culture, we were able to take in the Rio scenes of scantily clad women and gun toting “cholos” no problem—that is common in many parts of the Latino world. But, all was not well and right with this film.

Like too many films coming out today, this film did not offer any truly good, positive role-models. All of the characters ended up being “bad” in the end. Even the great DEA agent, Dwayne Johnson’s character, goes bad, helps the thieves, and laughs when the thieves get away with it all. In this film, there were bad bad-guys and good bad-guys…but they are all bad guys. You take that element and mix it with clever dialogue, seeming-invincibility, super-coolness, humor and you get a formula for future disaster.

Why would I say that? I can imagine too many kids walking away from a film like that thinking, “Yeah, I want to be a good bad-guy like Dom…family first…trust…love…but steal and hit and kill and damage to get what I want. But, a good bad-guy.” What? A good bad-guy? What an oxymoron!? I have a feeling that much of the violence we see in Mexico today, violence that is showing up in the drug-cartels and even in the common thieves who roam the streets, was spawned in Hollywood and television movies/series that set forth this increasingly popular character—the good bad-guy. And, “Heck, if being good is so much work, why not just give in to selfishness, egotism and greed…but be a “good” bad-guy as I go about it??” If everyone out there was a critical thinker, these movies would just be fun. As it is, as it has been for decades, art shapes life…as life shapes art.

While I have very little chance of changing Hollywood or popular culture, I can (and will!) teach and encourage critical thinking. As we drove home from the film last night, we talked about the film and raised those questions of good, bad and everything in between. My wife, my teenagers and I discussed the messages of the film (as well as the funny and clever parts, and the stunts and special effects), and came to some conclusions about the film…and revisited some things we’ve known about Hollywood all along. “Good bad-guys” are still bad. Stealing is wrong, money is not the end all, sex has its pleasure and place…and Hollywood is all messed up when it comes to these issues!

The final question that came up on our ride home was, “Okay…they have $11 million each—what do they do now?” How long can they sit around on a beach and do nothing?? Andrew suggested that learn to love reading and fund a library nearby. I love my son….

Posted by Wilderness Wonderings at 10:49 AM No comments: